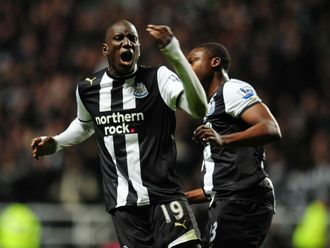 HB Sir Alex!
We are amazing thats what happened.
sure you are sick fatty

You cant count either :DDDDDDDDDDDDD
Parent
I woke up few minutes ago, fuck off :D
Parent
lollololol
Parent
cabaye is an amazing player! Already knew about him back when he was playing in France! great signing for Newcastle
Parent
Ye, especially for how cheap we got him. Same with tiote and Ba. Our best signings have been small price and Krul came through the academy.
Parent
Ba was a risk tbh :P did not expect him to do so well! always nice to see teams get good results with their own youth products
Parent
You'll do well to keep hold of krul and tiote! As an Everton fan transfer windows are fucking horrible
Parent
Not sure about Krul, he came through the youth academy so he kinda owes it to Newcastle to stick around, especially when they are playing well.

Tiote rejected chelsea last year and signed a new contract, but the fact that Pardew has stated that he has to sell if the offer is right is a joke.

Also, think you will struggle in the window. Not a nice time for Everton :(
Parent
You'll be lucky to keep him! We thought the same about dunne,rooney and jeffers ( lol good one franny) only loyal player we had was arteta who was asked to leave by our board because we couldnt afford his 75k a week wages :( Everton havent had a good time since the 1980s that european ban did us over loosing players like gray and linekar had no chance and been down hill from there expecting jagielka and rodwell to leave this year at some point united need midfielders and they have a thing for our youngsters :( Ross Barkley will be going in a few years as well
Parent
If man utd dont go in for tiote, i can see them trying to grab rodwell. Cahill Jagielka and Baines will be on a lot of teams radars, even those abroad.
Parent
Cahill is fine now tbh wouldn't even mind him leaving for 5mil+ if he aint scoring his hold up play isn't worth a place in the team, we miss Arteta loved that man :'(
Parent
aye, arteta really was so underrated! it's really sad what's going on with everton. i know it is maybe harsh but can't they get someone with loads of money who would invest in club (like qpr for example) or theres no interest from club staff/owner?.. I really admire Moyes and his work. And yeah rodwell is an exceptional player but still need to work hard to get into top shape.
Parent
Sup RvP is still better then BA!
Parent
Dutch goalkeepers are prolly the best. VDS previously, now Krul and Vorm. You also forgot Coloccini and Gutierrez (and Haris Vuckic ofc, slovenian "wonderkid"). They woke up with the right foot this year :)
Parent
American goalkeepers! Howard friedel kelly previously hanneman cant spell his name :D
Parent
could be, hard to say. howard is cool, friedel is fucking amazing at spurs (most consistent gk in some time imo), dunno kelly and heard abou hanneman once i think. But still.. cannot forget that Vorms performance against city at the start of the season. Krul is showing for a year or two what he is capable of. Then there's still their no1 Stekelenburg (roma was biggest mistake atleast for my opinion), Cillesen young goalkeeper of ajax is also coming up the ladder.. dunno really hard to say :D
Parent
haha, now City will win champion finally!
there is still toty in the fight m8!
Parent
all croats are the same about tottenham :D they are the best just because vedran luka and niko (my workmates are like that). but have to agree, they're playing really well + modric is defo best midfielder in premier.
Parent
i agree 99% croats are stupids who only like toty coz 3 croats are playing there but i am not one of them, i have been a fan of spurs for years now ever since klinsmann played there.

And i really think niko is a shit player good only for teams like everton who can have 9 players playing to cover his lazy slow ass so he can do his one great play per game coz the rest from him is simply shit.

Corluka is from my home town and my friends who still go out a lot see him all the time dead drunk in last year or two all over the time.

Moders is great but imo he can be so much better.
Parent
very nice to hear! Yes it is kinda true bout Niko. He's moving like a grandmother thorugh the field, but still he has some decent touch. Was always wondering why Redknapp doesn't wanna use him, or just sell him as you said to Everton or somthing. He's just a bit too valubale to warm the bench.

Hehe, also heard something like that. My workmate is also a croat, living/working here (forgot from which town), but told me the same story. Every year when they have some kind of a holiday, Corluka make a party in Croatia with loads of people. He's very kind they say.

Looks like i have to agree on anything you said :D I think only Xavi atm has better vision, passing ability or just pivotal midfield skills as Modric. I am a chelsea fan and was really dissapointed when we failed to lure him away from Spurs. That would be such a boost i can't even think of. On the other hand i have to say Levy is one hell of chairman, because w/o Bale or Modric it just wouldn't work this way. He has to go asap anyway if he want to level up. Exactly as you said, he still has a lot of space for improvement to be the best midfielder @ world.

Sorry, my english is a little bit dusty :D Btw. what do you think about Kovacic. I think Mamic will defo get 10+ mio for him in coming years. I just couldn't believe what he is capable of at just 17 years!!
Parent
Kova&#269;i&#263; is a hard one to call tbh hes too young and if i was Mami&#263; now i would prolly sell him if i had some great offer since hes in press alot after cl.I agree its impresive what he can do with just 17 but it isnt really a must that he will be a great player one day. He could be but then again he could just stay at these lvl its really hard to judge before 20/21 year imo.
Parent
Can see big offers coming in for Tiote in the summer, on his day he is the best defensive midfielder in the league. Hopefully he doesn't leave because with a few additions we'll have a very strong squad.

Hope Coloccini signs a new contract, it's amazing what a year in the Championship did to him.

Santon impressed. I don't follow Italian football, what happened to him at Inter? Was it the knee injury?
Hard to say about Santon. They tried to play him many times at Inter but it just didn't work. Rannochia/Nagatomo seems like a better option. Looks like english defensive style suits him much better. We still have to wait, since he had just few good games, but i still hope he'll make it through.
Parent
Howay Sunderland!
Back to top
ET Spring Cup 2021 predictions?
Download ET
+
+
+